Also a Raffle / Quiz, with prizes.

7-30 pm at The Old School, Guilsfield. Refreshments available.Tickets ( or at the door on the evening ) £5

All proceeds to the first ever Welsh translation of a Sherlock Holmes adventure. Prizes provided by :- Sainsbury’s /Tesco/Deerstalkers/

Forensic Science from Sherlock Holmes to the Present Day

Proceeds were in aid of: St. Aelhaiarn’s Church, Guilsfield and The Deerstalkers.

A PowerPoint presentation by Ian C Corke looked at the forensic techniques which were available to the police from about 1850 to the present day.

It was an ideal opportunity for those who wanted to get an insight into the scientific methods used by the MPS (Metropolitan Police Service), Home Office and Security Services to solve crime.

The sophisticated techniques which allow the police to build a case from minute traces of material found at the scene of a crime was examined.

Some well-known cases were discussed including those of:-

The evening concluded with a quiz about Sherlock Holmes, but members of the Deerstalkers were not be allowed to take part.

Questions had multi-choice answers so it was possible to win even if you knew very little about the great detective.

The Great Hiatus this year was a visit to Ruyton-XI-Towns on Thursday 2nd August.

The Game’s Afoot !  – Saturday 14th February 2009 7.30 pm took place in the School Room at the Welshpool Methodist Church, Welshpool.  A

An evening of Holmes related topics, including;  Mrs. Hudson’s Life by Joan Upton-Holder; Victorian Songs sung by Christopher Moore-Bridger; Policing in Holmes’ day by Maurice Eaton; The Second Afghan War by Peters Duckers, and an introduction by Dennis J. Duggan and Roy Upton-Holder.

The Great Hiatus – 2010 was on Friday 23rd July.  The visit was to Pistyll Rhaeadr, the highest waterfall in Wales which is called the Welsh Reichenbach Falls by Holmesian aficionados. Lunch was taken in the cafe which is open everyday of the year. 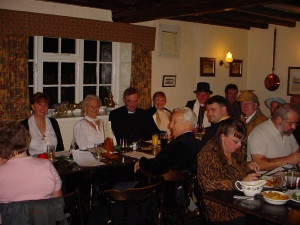 THE DEERSTALKERS OF WELSHPOOL CELEBRATE THE GREAT DETECTIVE’S 152ND BIRTHDAY 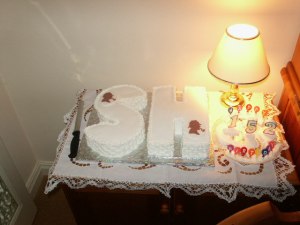 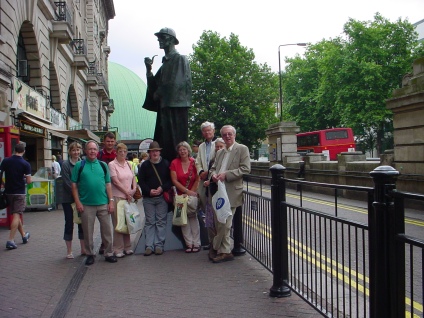